Today we are going to talk about the Mark of The Beast Chip and a new patent regarding a human microchip with the patent number 060606.

Why do I think it is the mark of the beast chip?

I do not think anything other then what I am going to tell you and what that needs to be said. I want you to do your research and come to your own conclusions. In the Bible, it is said that before Jesus must come back for the rapture that there would be a mark of the beast with the numbers 666 incorporate it into it.

On March 26 2020, Microsoft Internationally patterned a human cryptocurrency system that would allow for a cashless world. The way Microsoft has set this up coincides with the activities of Mr Bill Gates anything to do with him would look suspicious to anyone that would know what is going on right now.

There are many conspiracies at the moment regarding Bill Gates. The patent for the so-called mark of the beast chip was created on June 20, 2019, and it was released on April 22 2020, at that point the patent was granted international status.

The title of the mark of the beast patent is labelled as a cryptocurrency system using body activity data.

What is so important about this invention and the mark of the beast?

In the Bible, it states in revelations, that when Jesus comes back for the rapture, it is after there is a system created that has the numbers 666 integrate it on it.

Now, what makes this look more plausible as the mark of the beast is, and this is from the abstract from the patent application:

Human body activity associated with a task provided to a user may be used in a mining process of a cryptocurrency system.

In other words, this means that they will design a chip that will be inserted into the body, that will monitor your daily physical activity in return for cryptocurrency, so we’re going to get paid for them to be able to spy on us.

The thing that worries me regarding this device the mark of the beast chip is and how they are going to design this.

This essentially will go out to the members of the United Nations and a few over regional organisations that will be able to use it. Hence, it’s kinda building the new world order for the deep state and kind of though the U.N.

Is kind of funny that someone like Microsoft would produce this chip considering all the things that Bill Gates has been doing lately to destroy humanity. If this is the mark of the beast, this could be the kind of person, and they could make it happen.

Is kind of funny as well that Mark of the Beast Chip patent code is 060606?

We are heading towards a cashless society. The justification to get rid of cash due to the disease through the image it will spread from the coronavirus will make it easier for us to adopt the idea of cryptocurrency.

I also believe the credit cards will become a finger the past; as they can also spread disease through keypads and touch screens.

This is the passage from revelations that I’m going to read to you “hey causes all, both small and great, rich and poor, free and slave, to receive a mark on their right hand or their foreheads, and that no one may buy or sell except one who has the mark or the name of the beast or the number of his name”.

Shock as It’s Revealed an Enzyme Called Luciferase Is What Makes Bill Gates Mark of The Beast Chip Work.

Bill Gates is building something that we call the Human Implantable Quantum Dot Microneedle Vaccination Delivery System, and it is composed of multiple things. This is how I think it is the mark of the beast chip that God did talk about and Jesus did as well.

I want to draw your attention to one component, the quantum dot microneedles that will deliver the vaccines, and an incredibly unique biochemical that makes it all work.

If you are standing up while reading this, you might want to sit down.

Today we bring you there ‘near-infrared bioluminescence enzyme called luciferase’ which is the chemical that will make the quantum dot vaccination readable through a unique mobile device app.

That is right, the enzyme that will light up Bill Gates Human Implantable Quantum Dot Microneedle Vaccination Delivery System and it’s called Luciferase, that is what makes the vaccination readable long after the victim has been injected. Luciferase.

The way that this looks, is the mark of the beast chip the one that God warned us about. This will come after pandemic two which Bill Gates was talking about on T.V. and I have shown you videos of already. 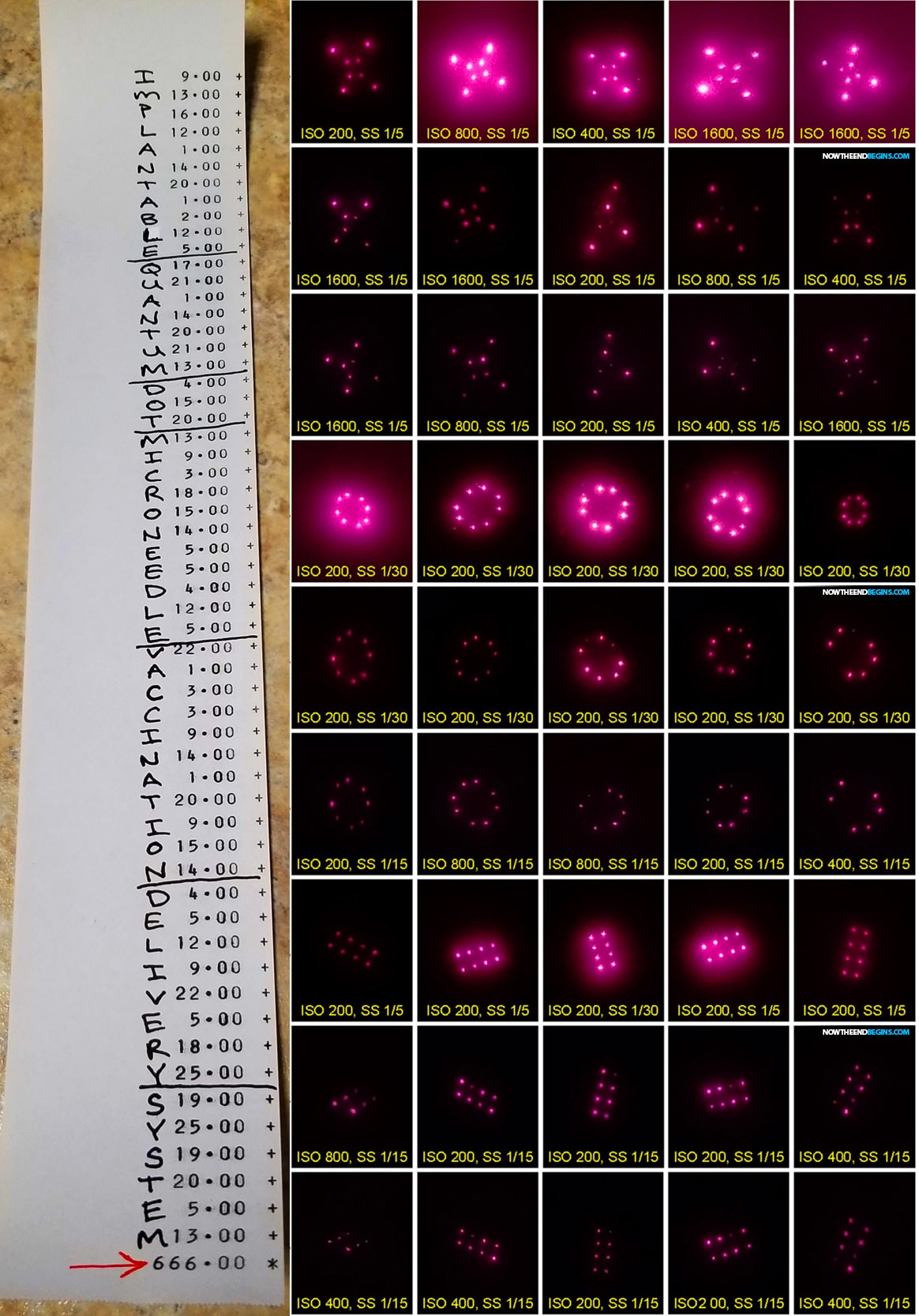 The reason why it will come after that as they will tell you that it will be to make sure that you are safe. The mark of the beast chip will be the end of your life and your freedoms as you know it and will come with the vaccine for the coronavirus pandemic 2, they did discuss.

Without this vaccine and mark of the beast chip inside your hand or head, you will not be allowed out in public areas. This chip will be tied into the SpaceX biometric systems satellites there already been installed around the Earth as we speak.

I pray to my brothers and sisters that read this message, please do not take the mark of the beast chip with the patent code 666. I believe this will be issued for scaled worldwide use again, through the U.N.

I will share some of the things that Bill Gates is involved in other projects shortly one is the digital I.D. project which is ID 2020 alliance. On the website for this ID 2020 on its homepage, it does say that the project has been addressing the issue of digital rights since 2016. on the site, it did also say in 2018 the alliance worked with Oh the United Nations for refugees.

Event 201 was another thing which they worked on which was a pandemic tabletop exercise hosted by The Johns Hopkins Centre for Health Security in partnership with the World Economic Forum and the Bill and Melinda Gates Foundation on October 18, 2019, in New York, NY.

The exercise illustrated the pandemic preparedness efforts that needed to diminish the large-scale economic and societal consequences of a severe pandemic.

Drawing from actual events, Event 201 identifies essential policy issues and preparedness challenges that could be solved with sufficient political will or attention. These issues were designed in a narrative to engage and educate the participants and the audience.

Bill Gates, Harvard, To Begin Blocking Sun in After The Mark of The Beast Chip, Starting Spring Of 2019?

The Bible has four parts before the rapture, and the 3rd part is the 666 mark of the beast. The 4th part is the days being filled with darkness. Due to the knowledge of the Bible, I went looking to see if there was anything about blocking the sun.

I found Bill Gates at the centre of it again!

The 4th part of the Bible says that we will go into darkness and the light will go away. The Harvard scientists Bill Gates is paying launched a manoeuvrable balloon into the stratosphere above the United States southwest region. The balloon was then programmatically to release calcium carbonate into the stratosphere. The initial test is slated for the spring of 2019 (so yes, within a year).

Scientists are basing the working concept on past volcanic eruptions, namely, the massive explosion of Pinatubo in the Philippines in 1991. Pinatubo’s volcano blew 20 million tons of sulphur dioxide into the stratosphere.

Does This look kind of fishy as does the Mark of The Beast Chip?

Worse more, computer models have no idea what will happen once they start testing the theory. Hence, the “controlled experiment” using calcium carbonate particles.

Will this result in more rain?

Ok, I have spoken about vaccines in other posts I will not do that again today as this is regarding the mark of the beast chip. Now we have set a boycott page up I do want to talk about this wait is boycott businesses movement the only way that we’re going to hurt these people correctly is it we don’t buy that product we sell.

Join our BBM Group on FB:

WHO and vaccination for everyone?

The Truth About Vaccines

So, we set a group up on Facebook that will allow us to pull information regarding things like we talk about to start a mass boycott from buying products in the businesses that aren’t doing very well from these evil people.

If we carry on this way, we will have no freedoms left and in the bible, the mark of the beast chip says, if you do accept it, you will not be saved in the rapture. Over the last few months, my relationship with God that allowed me to contact him through prayer.

Links for Reading & Researching The Mark of Beast Chip:

Microsoft – The Mark of The Beast Chip